What Should I Know About a Snow Blower? (Answered)

A good portion of us will never have to worry about snowblowers. I had no idea about them until I read up and did my research for this article.

If you’re ever going to need a snowblower, it’s helpful to know what they are, the basic types you might end up using, how they work, any special features to look for, and important safety information.

Want more details? Of course, you do! So, keep reading, and I will do my best to provide them.

What Is a Snowblower?

A snow blower or snow thrower is a machine similar in build to a lawn mower that removes snow from problematic places. Instead of using a shovel, people use these machines to clear sidewalks, driveways, and parking lots of snow. The larger driven snow blowers might also be used for clearing railroads, roadways, and even runways.

There are snowblowers no larger than an impressively sized lawn mower. They are pushed just like a lawnmower, too. There are then the riding snow blowers that an operator can use for larger places. They can be placed on tractors to be moved around and used as well.

There are truck-sized snow blowers that remove snow from large areas, and usually, the blower pushes the snow up and out of a side chute into a truck for haul away. Last, there are railroad snow blowers. Some of these are actually made of modified jet engines that both melt and actually blow away excess snow from the rails.

What Are the Basic Types of Residential Snowblowers?

Each stage increases the power needed and the moving parts used. The two-stage and three-stage both have self-propelling and sometimes has hand-warming built in the handles.

By the way, there is also a smaller version of a snow blower called a power shovel that can handle small jobs of up to 6 inches of light snow.

What Features Are Helpful for Those with Disabilities or Seniors Using a Snowblower?

Some of the most helpful features are things most people don’t even think about. But I have friends who are in their 70s, and I have friends who have things like arthritis and physical disabilities that limit what they can grasp and maneuver with their hands.

When it comes to snowblowers, those heated handles are, of course, great for keeping the joints warm in cold conditions. Some have LED lights to illuminate their path better. Most snowblowers start like lawnmowers, with the pull-start. But you can also find them with an electronic start.

There is also the electronic joystick on some models that work the chute adjustment. This is so much better than manually adjusting. Most snow blowers that come with track-drive instead of regular tires are much more stable and can be much easier to turn because it also has built-in turn-assist functions.

How Does a Snow Blower Work?

The standard, everyday snow blower that can be pushed around works by removing snow using an auger or an impeller to pull the snow in and disperse it out one side. These kinds of snow blowers can be electric (cord or battery) or petrol-powered. The same design is used for most of the larger versions.

The augers pull the snow into the machine and break it up along with the ice that it chews through. They push the collection toward the high-speed impeller, which then shoots the snow out the chute and away from the path. That snow can make it as far as 50 ft, and the chute can be turned to change direction.

Are There Any Safety Concerns About Using a Snow Blower?

Yes. However, if a snowblower is operated correctly, there shouldn’t be an issue. For years, the one thing that led to the most injuries to hands and amputation of fingers was when the snowblower would get clogged, and a person didn’t disengage the power and clutch before working to unclog the snow from around the augers.

Modern snow blowers usually come with a rod made for unclogging the augers as well as a dead man’s switch or dead man’s control to make sure all power is disengaged when the operator no longer has both hands on the handle. These machines should always be completely off, all parts not moving, and the operator should use the rod or a stick to remove clogs.

Always clean up any areas you plan to use a snowblower in. Just like you would do with a lawn mower, you don’t want anything hidden by the snow to be picked up, destroyed, or for it to cause damage to your machine. Always use the fuel described in your machine’s guides and store it properly. You’ll want to be sure and get that ready before any major storm hits.

It’s also advisable to only operate a snowblower in visible conditions so you know for sure where you are sending the snow. These machines can send snow anywhere from 10 – 20 – to 50 feet away, so be careful. Make sure there is nothing in front of the snowblower. And a side note for folks with a snowblower that has an electrical cord – always know where that cord is, do not run over it, and avoid the tripping hazard it might be.

I hope this article taught you more about snow blowers than you already knew. The research I put into it definitely taught me a lot. I’ll stick to my shovel for those few days per year when we actually get snow. But if this helped you with making a decision or helped you be more aware of the safety and operation of snowblowers, I’ve done my job. 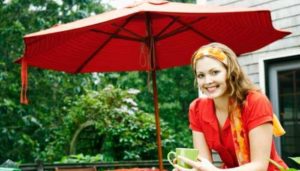 We have had our concrete patio poured and cured. The furniture and hot tub are being delivered piece by piece. We’ve decided to go with easy-to-assemble pergolas. I and the hubs walk outside and consider where to put everything when suddenly our peaceful moment is interrupted by the sound of the heat pump cutting on. … How to Use Landscaping to Keep Cool in the Summer Heat

It’s not just your outdoor living space that gets heated during the summer. Your entire home can go through a change that leads to higher energy bills and miserable conditions. One, very efficient method of cooling both your patio and your home is simply by using landscaping.  By using trees & shrubs to shade roofs…

If you want to use plants for privacy in your backyard outdoor living space then be sure to read these 4 things you should know before you decide.